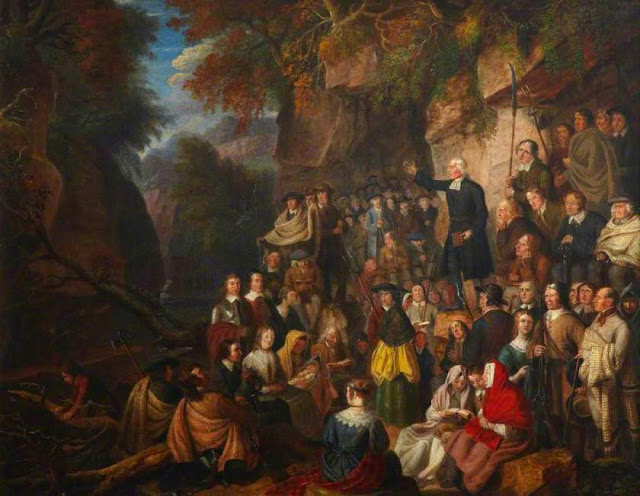 More than an ordinary man?

Alexander Peden was born sometime during the year 1626 in Scotland. His father was a small business man who left him a small inheritance. He could have entered into any of the social positions in the area, but a call from God came to him early to seek the proclaim the good news of everlasting life to his neighbors. Graduating from the University of Glasglow, he was ordained and became the pastor of New Luce, in Galloway, in his native Scotland. It was here that his congregation discovered that Pastor Peden was more than an ordinary man.

Let Rev. J.M. Dryerre sum it up for us. He writes, “his prayers were conversations with a personal friend. His sermons were visions of the glory of God which had come to him in his meditations, and filled his people with awe. His talk was about God and His will in regard to downtrodden Scotland. Tall in stature and well-built, he proclaimed his message from God.” (Heroes and Heroines of the Scottish Covenanters, Rev. J.M. Dryerre, Religious Tract and Book Society of Scotland, 1907, p. 100)

But these were times in the kingdom which were not easy for anyone to bear. The infamous ejection of ministers from their pulpits by the Crown included the removal of Pastor Peden from his pulpit after his first three years. With great sorrow, he left the people he loved to begin a ministry in the fields and pastures of the countryside. Under an indictment from the king of England for that, he made many marvelous escapes from the soldiers, sleeping in caves and barns.
Continue reading here.
Alexander Peden Covenanter History Killing Times of 1685

Popular posts from this blog

The Testimony of Thomas Stoddart Executed in Edinburgh’s Grassmarket on 12 August, 1685

Posted at Jardine's Book of Martyrs : Thomas Stoddart was executed in the Grassmarket on 12 August, 1685. Matthew Bryce , David Law and Gavin Russell were hanged alongside him. ‘Men, Brethren, And Fathers, Hearken,—I being to take my farewell of the world, I leave this my dying testimony, according to the form of the Christians of old; I having like the same ground for it that he had who used that word; that was Stephen; who was condemned, because he spoke blasphemous words against the law and the temple. So, because I will not adhere to, nor approve of their laws, which now have power in their hands, they condemned me to die, though they could not witness so much against me for speaking against them, and they never essayed to prove the sentence upon me, which now I shall study in a word to give you an account of. And first, I received my sentence of banishment, and then notwithstanding of that I was committed to the justices to abide the assize, and they passed upon me th
Read more

Editor's Note: I am pleasantly surprised to discover this index page for "Scottish Covenanters" at ancestry.com . I hope you will find it helpful. For Christ's Crown & Covenant, Angela Somers-Wittman Posted at ancestry: About Scottish Covenanters Index In the 17th century conflict arose between Church and State in Scotland. Those who remained steadfast in their Presbyterian beliefs and refused to take an oath to the king saying that he was the head of the church became known as Covenanters. They believed that Christ was the head of the church and were punished for this belief. Many were forced to pay the ultimate price for this by laying down their lives. The Royalists and Dragoons, who were seeking their lives, chased the Covenanters from glen to glen, especially in the Lowlands. If anyone was found hiding them, they suffered imprisonment and/or death as well. This punishment was not just reserved for the strong and healthy -- children and the eld
Read more

Posted at Log College Press: Reformed Presbyterian minister David McAllister’s Poets and Poetry of the Covenant is a worthy homage to the heroic faith of the Scottish Covenanters in verse, which we have highlighted on this blog previously, but its prose introduction should not be overlooked. It is a helpful overview of what the Covenanters stood for, and what inspired so many powerful poetic tributes. Let us briefly sketch the leading principles for which the heroes and martyrs of these songs of the Covenant contended: I. The supreme authority of God's Word in all the relations of human life. In the church, as one of their own number said, "they took their pattern, not from Rome, not even from Geneva, but from the blessed Word of God." They held that the state was bound to regulate all its affairs by the same law of ultimate authority. The Bible was to them a national as well as an ecclesiastical law-book. Kings and noblemen and lowlier citizens were all under its
Read more