Showing posts from February, 2011
Show all

- February 21, 2011
By Angela Wittman Let us continue with Pastor McLeod's pamphlet Negro Slavery Unjustified (printed in 1802) as he explains how American slavery of Negroes was in violation of the Commandments of God: 4. The practice which I am opposing is a manifest violation of four precepts of the decalogue. If this can be shown, it will be an additional confirmation of the doctrine of the proposition. Revelation informs us , that whosoever offends in one point is guilty of all. James 2:10. And the reason is added, because the same authority is wantonly opposed in that one point which gives sanction to the whole of divine revelation. By inference, therefore, the whole decalogue is violated; but there is a direct breach of the fifth, the sixth, the eighth and the tenth commandments. The fifth requires the performance of those duties which respect the several relations in which we stand to one another; and particularly enforces obedience to our natural parents. The Christian’s duty to the wretche
Post a Comment
Read more

Covenanters and Slavery - Part Three: 'To hold any of our fellow men in perpetual slavery is sinful.'

- February 14, 2011
By Angela Wittman In the pamphlet Negro Slavery Unjustifiable Pastor McLeod went on to write of the "natural rights of man" and what this means from a Biblical viewpoint, which is very different from the antinomian view of Libertarians [emphasis in bold text is mine - AW]: I. To hold any of our fellow men in perpetual slavery is sinful. 1. This appears from the inconsistency of the practice of holding slaves with the natural rights of man , This is a term which has been much abused. It is proper that accurate ideas should be annexed to it, otherwise its force, in the present argument, will not be perceptible. If man were a being, owing his existence to accident, and not a creature of God, his rights would indeed be negative. If he stood in a state of independency of his Maker, and not a subject of law, his rights could be determined only by the will of society. But he is neither the son of chance nor the possessor of independency . His life and his faculties are the gift o
Post a Comment
Read more 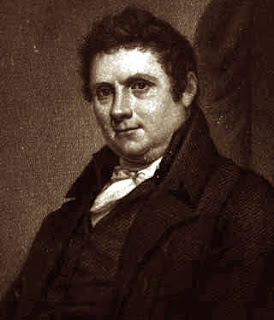 By Angela Wittman Alexander McLeod (1773 - 1833) was a man of character who took a strong stand against the inhumane slavery of fellow human beings.  Covenanter.org has this brief biography of Alexander McLeod , who was clearly a conservative theologian and a man of respectability.  He was no liberal wolf in sheep's clothing seeking to lead folks astray with unbiblical anti-slavery propaganda. Born in the Isle of Mull, Scotland, June 12, 1774.  His father was a distinguished minister of the Church of Scotland.  He came to America, by way of Liverpool, England, in the spring of 1792.  Soon after his arrival in New York, he moved up the Hudson to Albany, then to Schenectady, New York.  At the establishment of Union College, he became a student and graduated with honour in 1798.  He joined the Covenanter Church in Princetown, New York, under the eminent James McKinney.  He studied theology under his direction, and was licensed by the Reformed Presbytery, at Coldenham, New York
Post a Comment
Read more

By Angela Wittman While researching the history of the (RPCNA) Reformed Presbyterian Church of North America and abolition of slavery, I found these excerpts from on-line resources which report the RPCNA's history of the abolition of slavery officially began in the year 1800: Perhaps the most enduring change during the 19th century involved participation in social reform movements. One cause favored by the denomination was the abolition of slavery , beginning officially in 1800, when members were prohibited from slave owning and from the slave trade. Enthusiastically supported by most members, the denomination took a strong stance against the Confederacy and faithfully supported the North in the Civil War , as Reformed Presbyterians enlisted to fight against the "slaveholders' rebellion." Abolition was a major factor in the decline of the denomination's South Carolina and Tennessee congregations: most members there, finding it hard to be abolitionists in
Post a Comment
Read more
More posts