Showing posts from May, 2016
Show all

Apples of Gold: 'The Two Margarets' 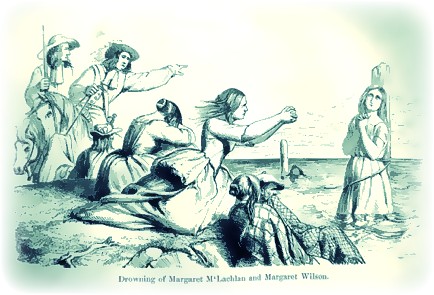 The years 1684 and 1685 were years of terrible suffering to the Covenanters. The history of these years is written in letters of blood, and they were emphatically called, by the sufferers, 'The Killing Time.' the savage ruffians, who were scouring the country like incarnate demons, hunted the poor helpless victims of their cruelty like wild beasts, over moors and mountains. If they met with a person who refused to answer their questions, or who did not satisfy them in his answers; or if they found another reading the Bible; or observed a third apparently alarmed or attempting to escape, they reckoned all such persons fanatics, and in many instances shot them dead on the spot. The devil had gone forth, having great wrath, as if knowing that his time was short. Patrick Walker remarks, that during these two years, eighty persons were shot in the fields, in cold blood; and he further …
Post a Comment
Read more

The Woman Who Never Was

By Dr. Mark Jardine - Posted at Jardine's Book of Martyrs:


Amid the flotsam of the Killing Times of 1685 are a few brief lines on a threatened drowning of a woman at Kirkcudbright. She never was drowned, but her remarkable story deserves to be told…

The case of Grizel Fullarton has striking parallels with the drowning of the two Wigtown martyrs, Margaret McLachlan and Margaret Wilson.

Grizel Fullarton was captured by Colonel James Douglas, who commissioned the court that initially sentenced the two Wigtown women to be drowned for refusing the abjuration oath in April, 1685, under powers awarded to him on 27 March.

The events of Fullarton’s case took place earlier in the same year in the same jurisdiction, Galloway, but under a slightly different set of judicial commissions. She was scheduled to face some of the same judges that went on to condemn the Wigtown women, but under their commission to press the abjuration oath in January, 1685.