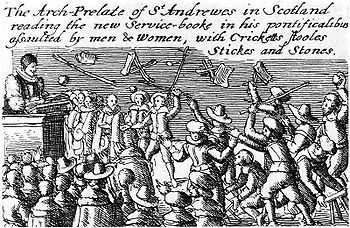 For more background of the account of Jenny Gedde's tossing her stool at the minister at St. Giles, here is an excerpt from Laud's Liturgy as posted at The Salty Scrivener:

Dean Hannay first read the new Scottish Prayer book, which became known as ‘Laud’s Liturgy’, at St Giles’ Cathedral in Edinburgh, on the third Sunday in July 1637. There is an interesting story relating to the first reading of the Liturgy. It is believed that a vegetable-seller, known as Jenny Geddis was in the church for the service. When the Dean began to read the liturgy, Geddis rose to her feet, shouting, “The devil give thee bellyache! Woulds’t thou say mass in my lug!”

Geddis then proceeded to throw her stool across the room at the dean. How much of this is legend is unknown, but there is a plaque on the floor of St. Giles Cathedral today, which marks the point from where Geddis registered her protest. The protest is thought to have been both heavily organised and heavily politicised. One thing is certain. The protest spilled over into the street, a riot ensued and the service was abandoned.

News of the riot spread fast, and thousands began to flood into Edinburgh to join the protest, for it had united both the common people and the nobility who shared a common resentment against foreign interference upon Scottish independence. The Privy Council called for the formation of a committee of commissioners, with whom they could enter into discussion. Committees or TABLES were formed, each representing one of the four ‘estates’ of the realm, i.e. the nobles, the barons, the burgesses and the clergy. The Noblemen’s committee took the lead, calling for a petition, to resist the Scottish Prayer Book and the King’s Reforms. Two men who were to become central to the covenanting cause in the days following the signing drafted the petition. They were Alexander Henderson, minister of Leuchars, and Archibald Johnston a young Edinburgh lawyer.

You can read more of the account of Laud's Liturgy here. 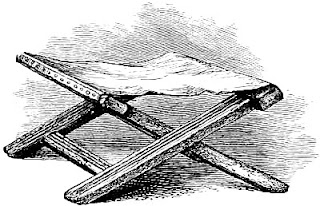