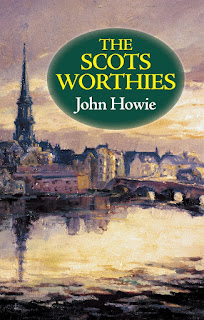 David Dickson was born about the year 1583. He was the only son of Mr John Dick or Dickson, merchant in Glasgow, whose father was an old feuar and possessor of some lands in the barony of Fintry, and parish of St Ninian’s, called the Kirk of the Muir. His parents were religious, of considerable substance, and were many years married before they had David, who was their only child. As he was a Samuel asked of the Lord, so he was early devoted to Him and the ministry. Yet afterwards the vow was forgot, till Providence, by a rod and sore sickness on their son, brought their sins to their remembrance, and then he was sent to assume his studies at the University of Glasgow.

Soon after he had received the degree of Master of Arts, he was admitted professor of philosophy in that college, where he was very useful in training up the youth in solid learning; and, with the learned Principal Boyd of Trochrig, the worthy Mr Blair, and other pious members of that society, his labours were singularly blessed in reviving serious piety among the youth in that declining and corrupted time, a little after the imposition of Prelacy upon the Church. Here, by a recommendation of the General Assembly not long after our Reformation from Popery, the regents were only to continue eight years in their profession; after which, such as were found qualified were licensed, and, upon a call after trial, were admitted to the holy ministry: by which constitution, the Church came to be filled with ministers well-qualified in all the branches of useful learning. Accordingly, David Dickson was, in 1618, ordained minister to the town of Irvine, where he laboured for about twenty-three years.

That same year, the corrupt Assembly at Perth agreed to the five articles imposed upon the Church by King James IV and the prelates. David Dickson at first had no great scruple against Episcopacy, as he had not studied those questions much, till the articles were imposed by this Assembly. These he closely examined; the more he looked into them, the more aversion he found to them; and when some time after, by a sore sickness, he was brought within view of death and eternity, he gave open testimony of the sinfulness of them.

But when this came to take air, James Law, Archbishop of Glasgow, summoned him to appear before the High Commission Court, January 29, 1622. Dickson, at his entrance to the ministry at Irvine, had preached upon 2 Cor 5:11, “Knowing the terrors of the Lord, we persuade men;” and when he perceived at this juncture a separation (at least for a time), the Sabbath before his compearance he chose the next words of that verse, “But we are made manifest unto God.” Extraordinary power and singular movings of the affections accompanied that parting sermon.

David Dickson appeared before the Commission, where, after the summons being read, and after some reasoning among the bishops, he gave in his declinature; upon which, some of the bishops whispering in his ear, as if they had favoured him upon the good report they had heard of him and his ministry, said to him, “Take it up, take it up.” He answered calmly, “I laid it not down for that end, to take it up again.” Spottiswoode, Archbishop of St Andrews, asked if he would subscribe it. He professed himself ready. The clerk, at the Archbishop’s desire, began to read it; but had scarcely read three lines, till the Archbishop burst forth in railing speeches, full of gall and bitterness; and turning to Mr David, he said, “These men will speak of humility and meekness, and talk of the Spirit of God, but ye are led by the spirit of the devil; there is more pride in you, I dare say, than in all the bishops of Scotland. I hanged a Jesuit in Glasgow for the like fault.” Mr David answered, “I am not a rebel; I stand here as the King’s subject; grant me the benefit of the law, and of a subject, and I crave no more.” But the Archbishop seemed to take no notice of these words.

Aberdeen asked him, whether he would obey the King or not? He answered, “I will obey the King in all things in the Lord.” “I told you that,” said Glasgow, “I knew he would seek to his limitation.” Aberdeen asked again, “May not the King give the same authority that we have, to as many sutors and tailors in Edinburgh, to sit, and see whether ye be doing your duty or not?” Mr David said, “My declinature will answer to that.” Then St Andrews fell again to railing, “The devil,” said he, “will devise; he has Scripture enough;” and then called him knave, swinger, young lad; and said he might have been teaching bairns in the school. “Thou knowest what Aristotle saith,” said he, “but thou hast no theology.” Because he perceived that Dickson gave him no titles, but once called him Sir, he gnashed his teeth, and said, “Sir! you might have called me Lord; when I was in Glasgow long since, ye called me so, but I cannot tell how, ye are become a puritan now.”

All this time he stood silent, and once lifted up his eyes to heaven, which St Andrews called a proud look. So after some more reasoning betwixt him and the bishops, St Andrews pronounced his sentence, in these words: “We deprive you of your ministry at Irvine, and ordain you to enter in Turriff, in the north, in twenty days.” “The will of the Lord be done,” said Mr David; “though ye cast me off, the Lord will take me up. Send me whither ye will, I hope my Master will go with me; and as He has been to me heretofore, He will be with me still, as with His own weak servant.”
Read more here...
See also:
Labels: David Dickson John Howie Scots Worthies