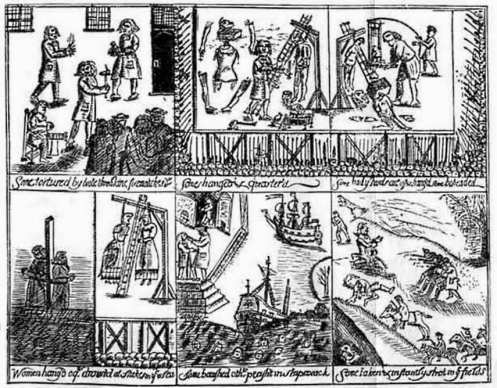 The Testimony of James Stewart, domestic servant to Thomas Steuart in Coltness in the parish of Cambusnethan, who was hanged at the Gallowlee, betwixt Edinburgh and Leith, on 10 October, 1681.

‘Dear Friends—I being in prison for Christ, and his persecuted cause, though some may say otherwise, and that upon the account of my taking; but I do not care what they say—for I have had, and yet have great peace in my sufferings—but some will be ready to say, That it was an—imprudent and an unsure action, and so might have been forborne—and suppose it be so, it is not the head of my suffering, for it was not that upon which I was staged,—for I was presently staged for the truth, the next day after I was taken, being brought before a committee;—though indeed I was not so free as I should have been.

There is a passage, Acts xxi. of Paul’s going up to Jerusalem, which, some say, he might have forborne, but more especially his going up to the temple, and doing these things which are according to the law; he might, I say, have forborne this, and walked consonant to his former practice, doctrine and writings: but though his going to the temple was the occasion of his taking, yet not the head of his suffering; so, I say, though that which I did in relieving my brother, was the occasion, yet my suffering was stated on another head. But I cannot see, how it is as ye say; for I seeing it my duty, and finding opportunity, had a clear call for all that I did. And besides all that, we being bound in covenant to defend and maintain one another, we are bound as well to relieve one another out of prison, when there is a probability seen.

But I need not stand much in making this out, it being the way that the Lord took to bring me to my suffering; and I am heartily content with my lot, and desire with my soul to bless him for it. Though I was dreadfully aspersed when that bond of liberation was offered to us, (for though some had clearness to take it, yet I could never have thoughts of taking it in peace; and I bless the Lord who kept my hand from it), it was neither strength nor sharp-sightedness in me that withheld me from yielding to the temptation; but the Lord hath shewed himself graciously favourable and kind onto me, now when I am set up like a beacon upon the top of an hill, and the eyes of many being upon me, and all are wondering at me, and calling me distracted, and saying, I am a fool, but (the Lord be thanked) I have all the senses that ever I had, though distressed, yet I despair not. Neither am I suffering as a fool; for I know assuredly, this is the way to obtain the promise. ...
Continue reading here.
Labels: James Stewart Jardine's Book of Martyrs